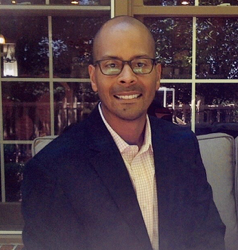 Karim Shortridge Principal Karim_Shortridge@hcpss.org
Dr. Karim Shortridge was appointed principal of Reservoir High School on July 1, 2020. He is returning to high school leadership after four years of leadership in middle schools and he is eager to connect with the students and parents of Reservoir High School (RHS). Dr. Shortridge is a husband and proud father of three children. He began his career in education as a middle school special education teacher in the Baltimore City Public School System (BCPSS). This experience was both very demanding and highly rewarding. As a young educator, he quickly learned the value of building positive and productive relationships with teachers, students and their families. Dr. Shortridge began his experience as a high school administrator in Washington County Public Schools and moved from Assistant Principal to Principal of Smithsburg High School. Coming to HCPSS in 2013 with 7 years of high school experience, he was appointed Principal of Oakland Mills High School, where he led the development of the early college program. Dr. Shortridge graduated from the University of Maryland, Baltimore County with a Bachelor’s degree. He holds a Master’s of Science degree from Hood College in Educational Leadership, as well as a Doctorate in Educational Leadership and Policy from the University of Maryland, College Park. Dr. Shortridge’s work with students is guided by the values of equity, inclusion and high expectations. He believes in listening to others and making informed decisions, which are grounded in the best interest of students. His goal is that RHS continues to be an amazing school environment for students to be academically challenged, participate in extracurricular activities, and have an enriching high school experience. He is dedicated to the success of all students and to support and encourage each child in achieving his/her maximum potential by instilling an intrinsic sense of worth, academic curiosity, and a life-long love of learning.

Stasha Swartz Assistant Principal (A-Do) Olga_Swartz@hcpss.org
Ms. Olga “Stasha” Swartz was raised in Howell, Michigan with her parents and four brothers. After graduating from Howell High School, Stasha attended Michigan State University for four years pursuing a major in English and a minor in French. She then transferred to Glenville State College in Glenville, West Virginia where she graduated with a degree in English Education, grades 5-12. Stasha always knew, though, that high school was her passion, and this passion has only grown as she has been a teacher, Library Media Specialist, and administrator. Stasha’s driving force as an administrator is her work with her students and teachers; she loves to see people learn and grow, and she hopes to bring this passion to Reservoir High School on a daily basis.

Meghan Senisi Assistant Principal (Dp-La) Meghan_Senisi@hcpss.org
Mrs. Senisi is originally from Pennsylvania. She graduated from the University of Delaware with a Bachelor of Arts in Spanish Education. Mrs. Senisi began her teaching career at Centennial High School where she taught for nine years. She continued her Masters of Education, majoring in Administration and Supervision, at Loyola University Maryland. In 2008, Mrs. Senisi was promoted to Assistant Principal at Long Reach High School where she remained for seven years. She continued her role as Assistant Principal at Marriotts Ridge High School for three years before coming to Reservoir High School. When not working, Mrs. Senisi enjoys spending time with her husband, Ken, her two daughters, Molly and Caroline, and their new puppy, Charlie. She enjoys traveling to the beach, watching her daughters play sports, and cheering for Steelers football. Mrs. Senisi is excited for the upcoming school year and looks forward to working with the staff, students, and community of Reservoir High School.

Michael Cometa Assistant Principal (Lb-Ri) Michael_Cometa@hcpss.org
Mr. Cometa was raised in Columbia and attended Dasher Green Elementary, Owen Brown Middle and Oakland Mills High School. After graduating from Oakland Mills, he attended Towson University, earning a dual degree in Elementary Education/Special Education and began his career as an elementary school special educator. Since that time, Mr. Cometa has worked at all levels - elementary, middle and high - in special education and as a math teacher while earning a graduate degree in School Administration and Supervision from Johns Hopkins University. Mr. Cometa is excited to be a Gator and believes that relationships are key to the success of a school. He looks forward to developing lasting partnerships with the students, staff and community of Reservoir High School. Sherri Levy Assistant Principal (Rj - Z ) Sherri_Levy@hcpss.org
Ms. Levy is a native to Maryland and graduated from Kennedy High School in Silver Spring, Maryland. She has earned degrees at University of Maryland-College Park, University of Maryland-Baltimore County, Stevenson University, and Towson University. Ms. Levy worked at Waverly Elementary School as a Substitute Teacher, Instructional Assistant and Teacher's Secretary. After obtaining a Masters Degree in Instructional Systems Design, Ms. Levy acquired a position as a Social Studies Teacher and Teacher Development Liaison at Centennial High School where she worked for 16 years. While working at Centennial High School, Ms. Levy taught U.S. History, Government and Politics and Psychology. Ms. Levy is passionate about helping students and staff grow to their fullest potential and works closely with Administration in supporting the 9th grade team, managing state testing and helping to facilitiate professional development for our distance learning environment. When Ms. Levy is not working she spends her free time playing with her grandchildren, painting furniture, reading, bike riding at the beach, and hanging out with her dog.

Josh Sullivan Activities and Athletics Manager Josh_Sullivan@hcpss.org
Mr. Sullivan is a product of the Howard County School System. He attended West Friendship Elementary School, Mount View Middle School, and graduated from River Hill High School. He received his undergraduate degree from Elon University. Upon graduation, he began his professional career at Reservoir High School as a long-term substitute teacher and Paraeducator. After being hired as a Special Educator, Mr. Sullivan obtained his Masters degree from Towson University and completed his Administrative and Supervision Certificate from McDaniel College. Reservoir High School is where Mr. Sullivan has taught and coached for his professional career. Throughout his time at Reservoir High School, he taught Special Education courses, English, Social Studies, and a Teacher Academy course. As an educator at Reservoir High School, Mr. Sullivan also served as a coach for Boys Soccer, Girls Soccer, Boys Basketball, and Baseball. He has worked with both JV and Varsity programs as a role of assistant, and as a head coach. Mr. Sullivan’s teams were very successful, winning multiple county and regional championships, as well as a state championship in Girls Soccer and Baseball. Mr. Sullivan was named Maryland State Coach of the year in 2010 by the Baltimore Sun and Varsity Sports Network for Girls Soccer. 2017 marks Mr. Sullivan’s 3rd year as Athletic and Activities Manager for Reservoir High School. He is excited to start his 14th year at the High School, and continue the success that the school teams, music programs, and fine arts have garnered. As he works with all of Reservoir’s extracurricular activities, you will see Mr. Sullivan most evenings at the events occurring at the school. He currently resides in Baltimore, MD. He is a big sports fan and loves walking to Camden Yards and watching his O’s win, as well as cheering on the Terps during basketball season!